Three consecutive years of droughts and flooding have left half of the population of Malawi in Southern Africa needing food aid. Balaka, in the southern region of the country, is one of the worst-affected districts.

Thousands of farmers did not harvest enough food to feed their families this year; either because of the lack of rain or an outbreak of army worm, which destroys crops.

Islamic Relief Malawi joined forces with the Muslim Association of Malawi to find those who have been the worst-affected and are receiving no other help.

Saina Ali in Taibu Village looks after four orphaned grand-children; Tashida (5), Hanif (8), Gift (11) and Fajra (13). She has a small piece of land and also does piece work on other people’s farms.

This year she only produced three bags of maize, instead of the usual six, because ‘armyworm’ caterpillars destroyed her crops.

“It makes me sad when there is no food as there is no one who can help me,” she explained. “The children cry when they are hungry and I can’t do anything about it. I get sick often when there is not enough food and do not have the strength to do much for the children.”

Saina is normally happy during Ramadan because, as she explains, “It is a rare month of mercy. I fast every year, even when I am not feeling well because I am grateful to Allah.” But she was concerned that she would struggle to be able to find enough food to eat during Ramadan.

Islamic Relief gave her a food parcel containing 20 kg of  maize flour, 10 kg of rice, 3kgs of beans, 3 kgs of sugar, 1kg of salt and 1 litre of cooking oil.

“This food pack has really helped me as I will no longer have to struggle to find food for Iftar,” she explained. “I will make a nice soft maize porridge to break fast and I can take sweet tea in the morning for suhoor, which is my favourite think to take in the early morning.”

Yayha is not able to farm as he is blind and his wife has difficulty walking due to contracting Polio as a child.

“This year my wife was only able to harvest four bags of maize because of the lack of rain and this only lasted four months,” said Yayha. “Now we are dependent on well-wishers.” 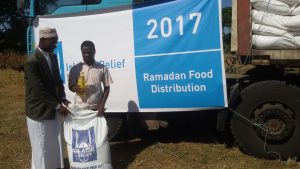 “We cannot afford to send the children to school and they are hungry. We go to sleep on an empty stomach and it’s hard for everyone.”

Now, Yayha and his family are relieved as Ramadan will be much easier with the food parcel.

“We are happy to be able to break fast properly with good food and will have maize or rice porridge with sugar for Iftar,” said Yayha.

He added: “As Muslims, this month is very special and a blessing for us all. We are happy with what we have received, as it is from Allah.

“Allah should continue to bless Islamic Relief because of the good work being done in Malawi.  Please continue to help us and others in need. I ask Allah to reward the donors for this help.”