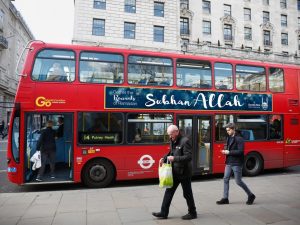 Hundreds of British buses will carry adverts praising Allah as part of a campaign launched by the country’s biggest Muslim charity to help victims of Syria’s civil war.

Islamic Relief hopes the posters, which bear the words “Subhan Allah”, meaning “Glory be to God” in Arabic, will portray Islam and international aid in a positive light.

Buses will carry the advertisements in London, Birmingham, Manchester, Leicester and Bradford.

These cities have large Muslim populations and the charity hopes it will encourage people to donate generously ahead of the start of Ramadan on 7 June.

According to Islamic law, Muslims are supposed to donate 2.5 per cent of their income to the poor and needy.

Known as Zakat, the pratice is regarded as one of the “five pillars of Islam”.

Many people choose Ramadan to donate their Zakat, as the month of fasting is regarded as a month of blessings.

Muslims believe the rewards for all good deeds are greater during Ramadan than during the rest of the year, according to Muslim Aid.

The charity hopes the campaign will help young Muslims channel anger about the war in Syria and discrimination at home into humanitarian work, thereby preventing them from becoming involved with extremist groups.

Imran Madden, the UK director of Islamic Relief, said: “In a sense this could be called a climate change campaign because we want to change the negative climate around international aid and around the Muslim community in this country.

“International aid has helped halve the number of people living in extreme poverty in the past 15 years, and British Muslims are an incredibly generous community who give over £100 million to international aid charities in Ramadan.”

The new campaign will appear on buses from 23 May on 640 buses around the country.

The adverts will have a special resonance in London as the city elected its first Muslim mayor, Sadiq Khan, on Thursday – despite a Conservative campaign which repeatedly accused him of having connections to extremists.

An estimated three million Muslims are believed to live in London – around 50 per cent of British Muslim population.