For five years, in six different countries and in dozens of camps, I have witnessed first-hand the effects of war and conflict on the people from the same nation my mother, grandmother and her mother were born in—Syria. I’ve seen my fellow Syrians in Lebanon, living in makeshift homes wherever they could find, a masjid construction site, a building boiler room and a leather factory near the city garbage dump.

In Jordan I saw them in the Zaatari camp as they tried to survive the dust, dirt and heat of the desert.

I’ve visited Syrians in Iraqi camps, where some had gone after being displaced twice—first from Syria and then from other places in Iraq as their new host nation became unstable too. Kurdistan in the north was now the only safe place they could flee to.

I’ve watched Syrians, Iraqis, and others risk their lives crossing the Mediterranean Sea on tiny inflatable boats that washed up on the shores of Lesvos, Greece.

I’ve watched Syrians come off the trains in the rail stations of Germany as they searched for family who had made the journey before them.

I’ve seen Syrian children trying to catch up on their lost educations in apartment buildings turned schools in Istanbul, Turkey.

I wonder how many more years and in how many more places do I need to visit my people. For as long as they are there, I will keep going, and I will keep bringing back their stories to the masses. The most common thing I hear, no matter where I see my people is, “Please let people know what has happened to us,” “Please remember us in your prayers,” and “Please don’t forget us.”

I won’t, I can’t—your stories and faces are ingrained in my memory forever.

So I ask everyone reading this:

On behalf of all of my people that I have met in Lebanon, Jordan, Iraq, Greece, Germany and Turkey …

On behalf of the mothers, the fathers, the doctors, the lawyers …

On behalf of the children most of all …

Please do not forget them.

Don’t let our attention fade. Don’t turn away as we cross off another year of their suffering.

They are counting on us. 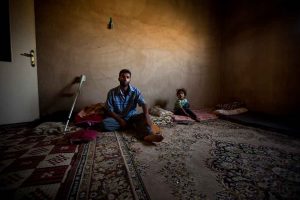