The Prophet (peace be upon him) said: “There is no deed done by the children of Adam on the day of Al-Nahr (Eid al-Adha) that is more loved by Allah other than shedding blood (sacrifice animals). Indeed, he will come on the Day of Judgment with his horns, feathers and nails and indeed the blood will reach the pleasure of Allah SWT before it falls to the earth. So, purify your souls (by sacrifice)."

Performing Qurbani is a sunnah muakkadah which is highly encouraged in Islam for those who are able to perform it. It is also one of the voluntary rituals that Allah SWT loves very much.

Allah SWT says: “And for every nation We have appointed religious ceremonies, that they may mention the Name of Allah over the beast of cattle that He has given them for food. And your God is One Allah, so you must submit to Him Alone. And give glad tidings to those who obey Allah with humility and are humble. (Surah Al-Hajj,34)

This worship is performed through the slaughter of livestock on 10 to 13 Zulhijjah with the aim of getting closer to Allah.

In order to facilitate the performance of Qurbani, Islamic Relief Malaysia continues to launch Rezeki Qurban campaign with #zahirkankesyukuran slogan from May 9th to July 1st, 2022.

This campaign aimed to collect RM660,000 which can benefit beneficiaries in 31 countries including Malaysia through 1,134 participations of Qurbanis performed.

The price for each Qurbani participation differ by country with range from RM350 to RM1,800. There are six groups offered with the addition of Sadaqah Qurban.

The objective of this seasonal program which conducted annually by Islamic Relief in globally is to provide an opportunity for Muslims who are able to perform sacrificial and to help vulnerable people through the donation of Qurbani meat.

The beneficiary selection includes single mothers, orphans, elderly, asnaf, people with disabilities (OKU) and refugees which will get one of these three types of Qurbani meat such as fresh meat, frozen and canned meat.

Each family will get between 2 kilograms to 4 kilograms of Qurbani meat which is expected to be sufficient for a week’s consumption.

The slaughter livestock which being selected also varies according to the country, including cows, bull, buffaloes, goats, and sheep. 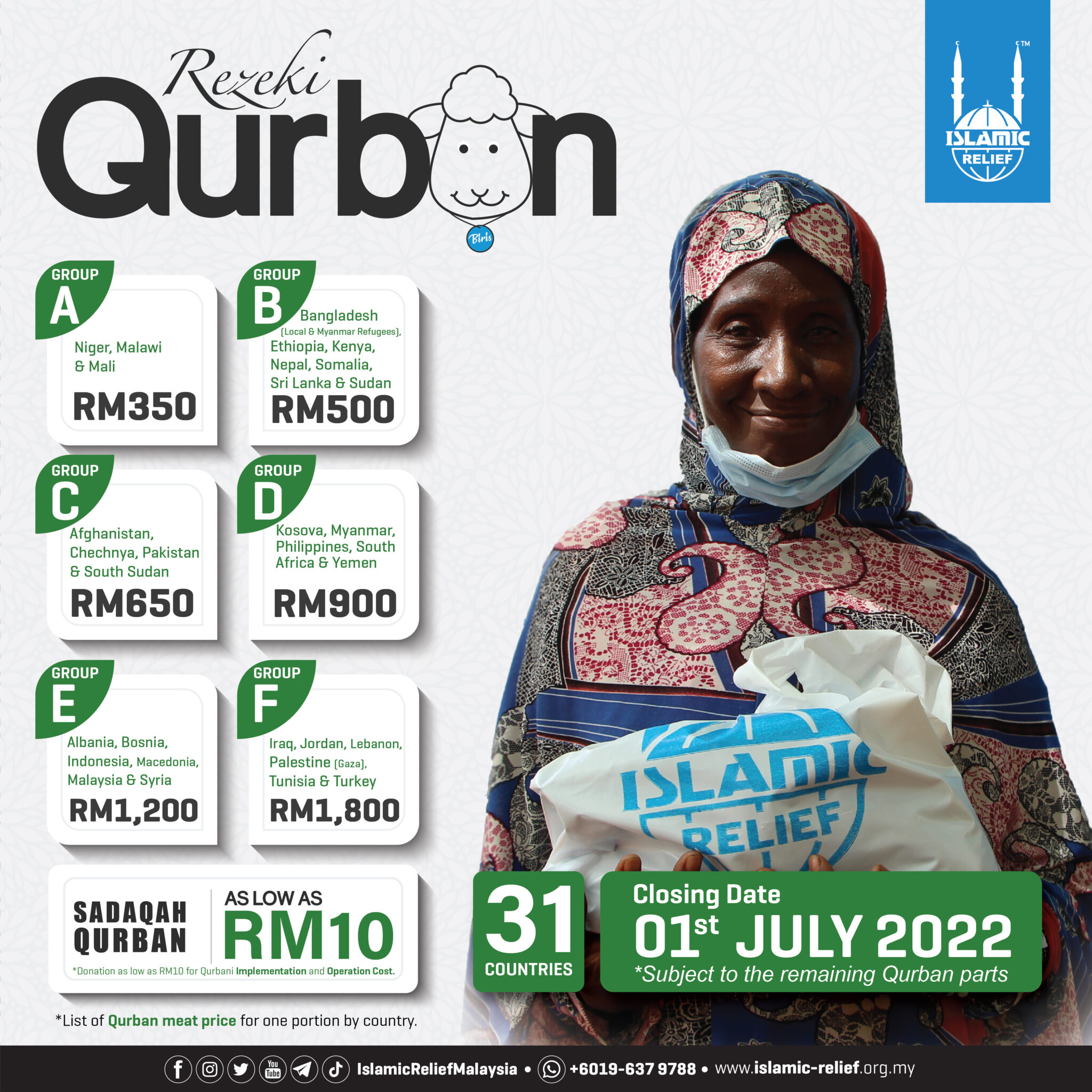 The Power of Sincere Dua

"Alhamdulillah, I am very grateful for to receive this Qurbani meat. To be honest, I was very surprised because even we are still in pandemic, many people were affected, but there are also people who are willing to contribute. May Allah bless all of you, keep you safe and protect all of you from Covid-19, so that you can continue to do charity work by distributing aid and assistance. May Allah always protect all of you.”

“I lived in Jampiras Island for about 43 years and this is the first-time people come to perform Qurbani worship and distributed Qurbani meat to us. We feel very touched and grateful to those who contributed and helped us. I am very surprise that there are people who still cares about us even though we are stateless."

“I feel very sad when my children say that they want to eat kebab. We couldn’t eat meat for a long time because I couldn’t afford it. I am always feeling worried about my children health condition because they are lack of food. When I know that we were selected as one of the beneficiaries of Qurbani meat distribution from Islamic Relief, I was very happy. Before this, I used to tell my children that if they want to eat kebab, they have to wait for Eid Al-Adha. Alhamdulillah, this sustenance is for them. Finally, they can eat kebab that they have been craving for a long time.”

"With the current unstable situation, we are struggling to find a job and we have to live in fear because we don’t have money and income. It is difficult for us to get food, especially for the disabled person like me. Here, many people need help to survive. If anyone willing to help us, we would be very grateful and happy."

* The price includes handling and management costs of qurban 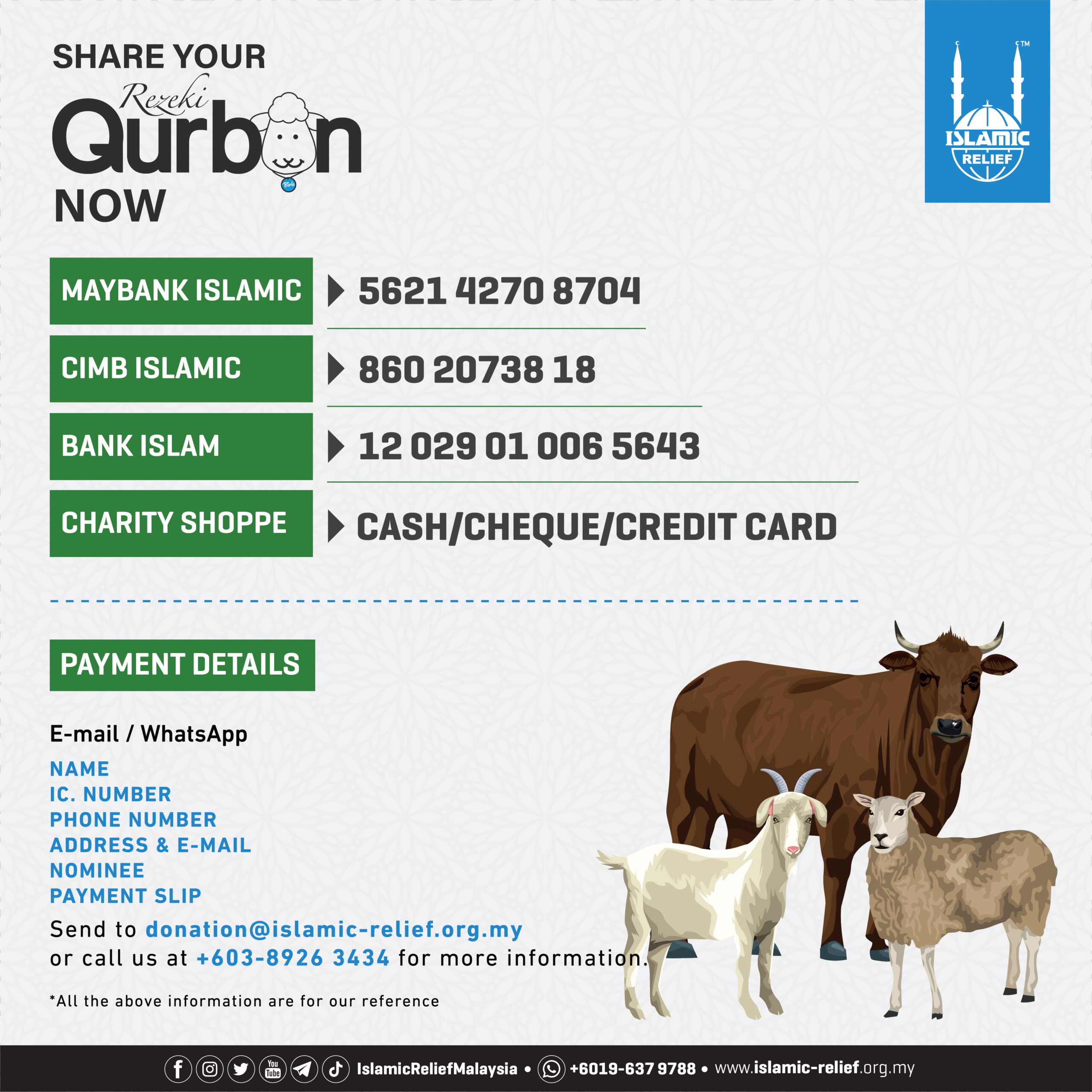